Wexford Reserve developers have invited only the best builders in the Triangle to build in our community.  Many of them have won prestigious awards from the Homebuilders Association of Raleigh-Wake County.  We proudly introduce our custom builders and assure you they have the experience and expertise to build your home right the first time, on time. 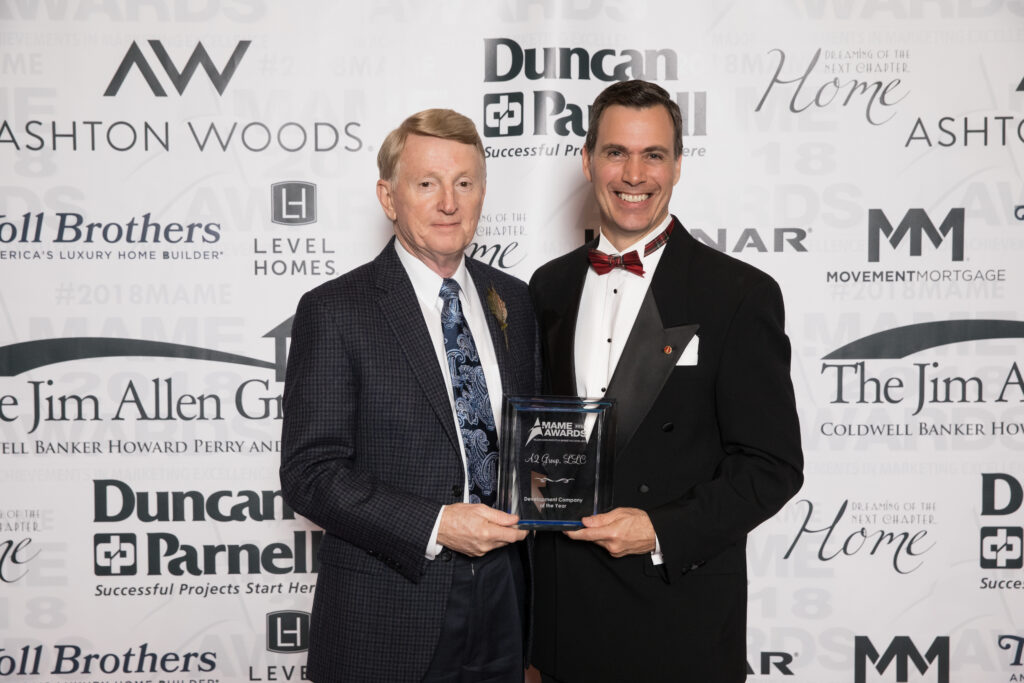 Jim Adams and Tom Anhut founded Waterstone Partners in 2015, combining their over 50 years of new home development experience and creating one of the Triangle’s preeminent residential development companies.  Recently they were named the Development Company of the Year by the Raleigh/Wake County Homebuilders Association in recognition of their outstanding work, evidenced through communities such as Wexford Reserve.

Their mission statement is simple; develop A-plus communities, in A-plus locations, with a focus on delivering beautiful homesites to the area’s preeminent custom home builders.

Jim M. Adams, Sr. is the founder and Chairman of the Millridge Companies which began in 1984 as a land development and custom home building company.  Over the past 35 years, Millridge has built single family homes, and developed single family, multi-family, mixed-use, and commercial projects in Franklin, Wake, Durham, Pamlico, and Johnston Counties as well as leading the restoration of a building on the national Historic Register located in Wake Forest.

Jim is a North Carolina native and received a Bachelor of Arts in Business Administration from Atlantic Christian College (now Barton College), in Wilson North Carolina.  Prior to founding Millridge, he served as owner, and CEO of Storr Office Environments in Raleigh, for 6 years.  In 1972 he obtained his North Carolina Real Estate Brokers License and in 1985 his North Carolina Contractors License.  Jim has been married for over 50 years, has 2 children and 4 grandchildren.

In 2014 Tom Anhut founded Anhut Properties, a residential land acquisition and development firm.  Prior to that, Tom was the Raleigh Division President for both Toll Brothers and Ashton Woods Homes for a total of 14 years.  Under his leadership, Tom’s new home divisions in Raleigh delivered almost 2,500 luxury homes, representing over $1.3 billion in revenue.  At Toll, he was also promoted to Group President responsible for overseeing the company’s new home divisions in Raleigh, Charlotte, Atlanta, and Hilton Head, including 4 golf course communities.

Tom hails from Michigan and graduated from the University of Notre Dame with a Bachelor of Architecture degree.  Prior to joining Toll Brothers, he served for 9 years as an officer in the US Army Corps of Engineers, stationed in Italy, Saudi Arabia, Boston, and in northern Virginia. He and his wife Theresa have been married for over 34 years and have 3 adult children.

OUR COMPANY’S FOUNDER, ARTHUR RUTENBERG, BUILT HIS LEGENDARY 64-YEAR CAREER ON A FOUNDATION OF DESIGN, INNOVATION, QUALITY, AND INTEGRITY. TODAY, WE HONOR HIS LEGACY BY HOLDING OURSELVES ACCOUNTABLE TO THESE IDEALS.

OUR TEAM AT BRITT CONSTRUCTION IS COMMITTED TO BUILDING EXCEPTIONAL AND DISTINCTIVE HOMES, BEGINNING WITH DESIGN, THROUGH CONSTRUCTION TO FINAL CLOSING, AND BEYOND. WE BELIEVE THAT NO DETAIL IS EVER TOO SMALL OR INSIGNIFICANT.

OUR COMMITMENT TO QUALITY AND AN AESTHETIC EXPERIENCE IS GOVERNED BY THE ABILITY TO INTERPRET A CLIENT’S NEEDS AND AN INSTINCT TO KNOW WHAT WORKS WHERE. THAT INSIGHT COUPLED WITH PRIDE IN CRAFTSMANSHIP HAS ENABLED THE FIRM TO PROVIDE A PRODUCT THAT ELEVATES THE BUSINESS OF BUILDING FINE ART.

YOUR HOME IS WHERE YOU WILL BUILD MEMORIES. AT EXETER BUILDING COMPANY, WE PROMISE TO LISTEN TO YOU, PAY ATTENTION TO DETAILS AND USE OUR EXPERIENCE TO CRAFT YOU AN EXCEPTIONAL CUSTOM HOME THAT FITS WITHIN YOUR BUDGET. TO ENSURE WE BUILD A RELATIONSHIP WITH A STRONG FOUNDATION, WE LISTEN AT EACH PHASE OF THE BUILDING PROCESS TO ENSURE THE HOME WE BUILD IS PERFECT FOR YOU.

GRANDE MANOR HOMES OFFERS EVERY CLIENT A TRUE DESIGN EXPERIENCE WITH AN EXPERIENCED INTERIOR DESIGNER FEATURED ON NBC AND HGTV. WE UNDERSTAND HOW IMPORTANT IT IS TO CUSTOMIZE EACH HOME TO THE NEEDS AND WANTS OF EVERY HOMEOWNER.

HERE AT HJ MORRIS, WE WORK CLOSELY WITH OUR CLIENTS TO ENSURE A SMOOTH AND STRESSFREE NEW CUSTOM HOME BUILDING OR REMODELING EXPERIENCE. WE ACHIEVE THIS BY UNDERTAKING FEWER CONSTRUCTION PROJECTS AT A TIME TO ENSURE OUR PERSONAL SUPERVISION AT ALL TIMES.

THE GOAL OF RALEIGH-BASED ICG HOMES IS TO DELIVER IDEAL LIVING SPACE WITH QUALITY, INTEGRITY, AND TRANSPARENCY. OUR TEAM EMBODIES THIS MISSION VIA AN ONGOING QUEST TO OFFER FRESH IDEAS AND APPEALING FEATURES. MAKE IT YOUR OWN WITH ICG HOMES.

KENDALL CUSTOM HOMES HAS BEEN DESIGNING, REMODELING, AND BUILDING CUSTOM HOMES IN THE GREATER RALEIGH AREA FOR ALMOST 15 YEARS. WE PRIDE OURSELVES IN BEING ABLE TO PROVIDE OUR CLIENTS WITH A UNIQUE, CUSTOM HOME THAT BEST FITS THEIR WANTS AND NEEDS. WE HELP OUR CLIENTS FROM THE DESIGN PROCESS ALL THE WAY THROUGH THE BUILDING PROCESS.

SPEIGHT BUILT STRIVES TO PROVIDE ITS CLIENTS WITH A UNIQUE CUSTOM HOME BUILDING EXPERIENCE FROM START TO FINISH. AN ELITE GROUP OF PROFESSIONALS SPECIALIZING IN ALL ASPECTS OF CUSTOM CONSTRUCTION FROM ARCHITECTURE AND DESIGN TO THOSE WITH EXPERTISE IN DETAILED INTERIOR CRAFTSMANSHIP ASSIST YOU IN BUILDING AN UPSCALE HOME.

KIMBERLY WALTERS, OWNER, BELIEVES A HOUSE IS NOT SIMPLY A PLACE TO LIVE, BUT A PLACE FOR A FAMILY TO CREATE A LIFETIME OF MEMORIES. EACH HOME IS BUILT WITH STYLE AND FUNCTIONALITY IN MIND. CLIENTS ARE GIVEN PERSONALIZED ATTENTION FROM THE START OF DESIGN, THROUGHOUT THE BUILDING PROCESS, UNTIL YOU MOVE IN AND BEYOND.

UPRIGHT BUILDERS IS A CUSTOM BUILDER OF DISTINCTION. SERVING NORTH CAROLINA’S TRIANGLE AREA SINCE 1987, THEY HAVE BUILT A REPUTATION ON PROVIDING CUSTOMERS WITH THE HOME OF THEIR DREAMS. UPRIGHT BUILDERS HAS GROWN THEIR BUSINESS BY BUILDING QUALITY CUSTOM HOMES IN MANY OF THE TRIANGLE’S PREMIER NEIGHBORHOODS.

WILKS BUILDERS WAS STARTED IN 2004 IN RALEIGH, NC AND IS FOCUSED ON PROVIDING A GREAT CUSTOMER EXPERIENCE BUILDING FINE CUSTOM HOMES, ADDITIONS AND RENOVATIONS IN THE TRIANGLE AREA. WE BELIEVE IN APPROACHING EACH PROJECT THE WAY WE WOULD LIKE TO BE TREATED WITH HONESTY, PROFESSIONALISM, AND FRIENDLINESS.
Interested in building a custom home?
Request custom home information
Contact Us

Lot availability, fit and selection will vary per plan and is subject to change without prior notice. Renderings are an artist’s conception intended for marketing use only. These drawings cannot be regarded as a representation of the final product nor is it intended to be an actual depiction of any homesite or its surroundings. Please refer to the recorded sitemap(s) for accurate information regarding the property including but not limited to the USPS verified mailing address, sideline and setback requirements and easements. The builder reserves the right to change and alter prices, materials, specifications, features, dimensions and designs without notice. The accuracy of all information, regardless of source, including but not limited to square footage and lot sizes are deemed reliable but are not guaranteed and should be independently verified through personal inspection and/or with the appropriate professionals.